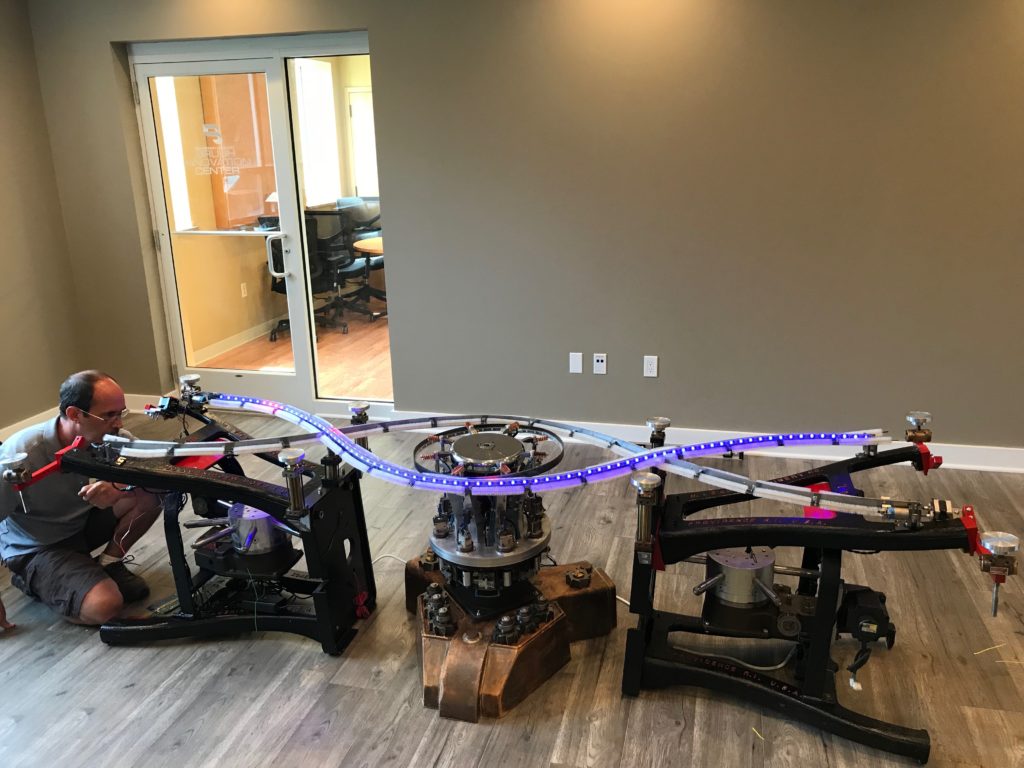 When local architect Robert Haveles suggested that Steampunk artist and ModVic founder Bruce Rosenbaum meet Sanderson MacLeod’s president Mark Borsari, he didn’t know their encounter would result in a functional art piece celebrating the region’s manufacturing history. “I had to get these guys together,” recounted Haveles, a principal at Palmer based Architectural Insights who, during a recent lecture at the Palmer Historical and Cultural Center, became intrigued by Rosenbaum. “Mark and Bruce are so different professionally, but their creative process and ongoing encouragement of others to push creative boundaries of innovation are the same. If our little community only knew the amount of unique industrial, manufacturing and transportation activities quietly happening in town, they’d be amazed.

After touring Sanderson MacLeod and their recently expanded Brush Innovation Center (BIC), Rosenbaum and Borsari felt a professional connection as well. Both, they realized, were currently living and working in Western Massachusetts and appreciate the creativity and talent that mechanical innovation demands. They also feel strongly that despite manufacturing declines experienced in the past several decades, the Quaboag Valley still possesses the extraordinary talent and Yankee ingenuity that once made it a vital part of New England’s industrial story. This belief, and an opportunity to educate their local community of its proud history and promising future put plans for a Steampunk conference table in motion.

“I chose to move to this area because I wanted to share my passion for technical artistry with trade school students, other artists and talented young people,” said Rosenbaum. “The Sanderson Steampunk piece tells the story of how a local company came to be an industry leader in brush innovation and gave us a really amazing opportunity to engage with, and hopefully inspire, local students about what careers in modern manufacturing or art fabrication can be like.” 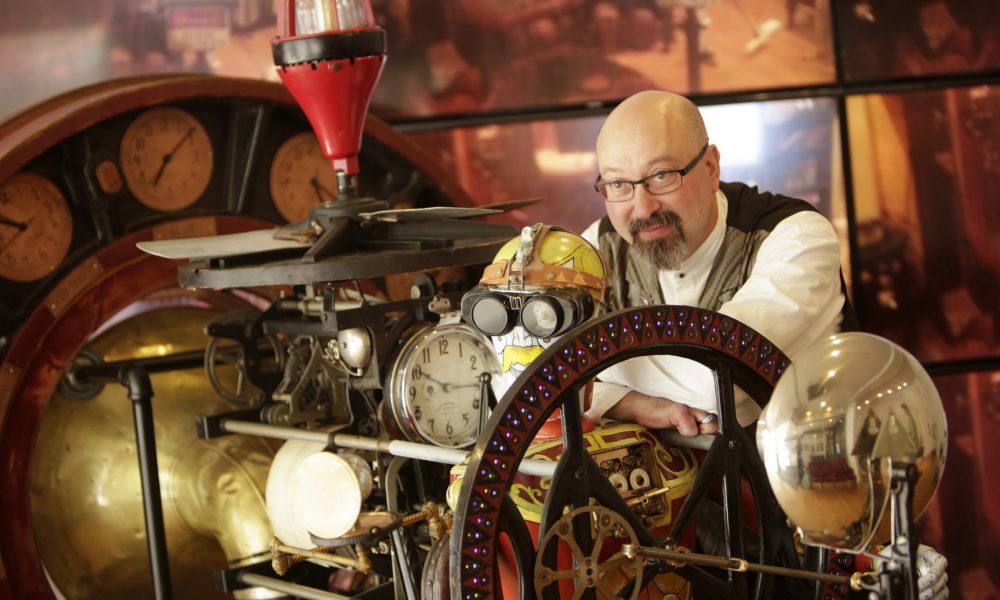 New to the Palmer area, Rosenbaum and his wife Melanie recently purchased and began extensive renovations (with Bob Haveles providing architectural guidance) to the previously unoccupied St. Mary’s Church in Thorndike. The mid-nineteenth century church will serve as the Rosenbaum’s personal home, complete with a fabrication workshop and viewing gallery for his Steampunk creations. That is, when they are not on exhibit in museums around the world. The Rosenbaum’s story and their ongoing renovation project were recently featured on the Netflix documentary series, “Amazing Interiors” (Steampunk Wonderland Episode 8).

According to Borsari, Steampunk’s history as an artistic movement made it the perfect medium for the Sanderson MacLeod conference table project. Steampunk, by definition, is the fusion of History, Art, and Technology. The root word of “steam” incorporates the common engineering STEM terms for applications (Science, Technology, Engineering and Mathematics) with one addition…Art. Essentially, for a piece to be considered “Steampunk”, it must repurpose and infuse modern technology into period, relevant antiquities and objects.

The table will be a central part of Sanderson MacLeod’s newly expanded Brush Innovation Center (BIC). The BIC offers proprietary sampling systems and prototyping equipment focused on reducing client brush development time and is where many of the largest and most progressive global brands in the cosmetic, medical, gun care and general cleaning markets find the assistance they need. Such engineers and designers travel from around the world to the Palmer company focused on developing new products requiring twisted wire technology. By specializing on providing the fastest “concept to market” prototyping and design assistance, Sanderson MacLeod offers these customers an edge in their highly competitive markets, allowing them to outpace their competition’s efforts by months, if not years.

“When it comes to being on the cutting edge of production capable twisted wire brush innovation and automation, every designer knows partnering with Sanderson MacLeod is critical”, said Christopher Tarling, CEO of Manhattan-based consumer product development firm MIXCreative, LLC. “Their specialization (in twisted wire brushes) is very unique. More importantly, the Sanderson team is very talented in quickly assessing which ideas can realistically be produced on a large scale… which is critical. I’m always impressed with how they’re constantly developing new concepts, many times before others in the field have even figured out what they’re doing now.”

Sanderson MacLeod’s long history (they celebrated their 60th anniversary in 2018) and storied accomplishments include the first commercially produced twisted-wire mascara brush, proprietary automation designs and supply integration solutions such as their newly launched inventory management system, ION. Recently patented products and processes include their ZTip protective brush tip system, a color bonded alternative to insert molded parts known as ZTip+ and a soon to be unveiled CIMA line of integrated molded mascara assemblies. The company domestically produces all of their products and employs approximately 120 dedicated people within its modern 137,000 square foot facility in Palmer, MA.

“Before meeting Bruce, I never thought our company would ever be involved with a Steampunk project,” laughed Mark Borsari recently. “But, that table’s come to represent not only our love of innovation but how we seek out inspiration from the most obscure places. It’s also become a great way to recognize the dedication, creativity and hard work all past and present Sanderson MacLeod employees. As this idea started coming together, just buying a traditional conference table started to seem much, much too ordinary.”

“I guess you could say this table’s home had to be at Sanderson MacLeod,” summarized Borsari. “I mean, it’s who we are.”